Prisoners have a right to:

CANADA’S PROPOSED PRISON FARM PROGRAM: WHY IT WON’T WORK AND WHAT WOULD WORK BETTER

In 2009-2011, Canada’s prison farms were dismantled under the Harper Conservative government. Public Safety and the Correctional Service of Canada said the farms were not financially sustainable and “did not reflect labour market demands of today and of the future.”

In 2016-2018, the process began to restore prison farms under the Trudeau Liberal government, beginning in Kingston Ontario. Public Safety and the Correctional Service of Canada said the new farms “will build essential skills for employment.”

The former prison farms produced food for prisoners (dairy, meat, eggs). This included an abattoir which remains in operation today with prisoners slaughtering animals for a private company. The new prison farm model, announced in 2018 to be implemented over five years, will be commercial goat dairy. Prisoners will factory farm 2200 goats to produce infant formula for the Chinese market. While the goat farm has been delayed, a herd of 60 cows has been added at a cost of $20 million, to be milked for research quota, not for consumption or market sale.

Since 2016, Evolve Our Prison Farms has advocated alternative models involving green agriculture and animal-assisted therapy. In 2021, after publishing our academic report “Canada’s proposed prison farm program: Why it won’t work and what would work better,” the Correctional Service of Canada announced a “temporary pause” of its industrial goat farm plans. Despite the opportunity to re-evaluate and transition Canada’s prison farms, the Correctional Service of Canada quietly commenced dairy facility construction in 2022.

Sheriff’s Office Animal Farm provides a haven for animals where inmates are taught how to care for and care about animals in the hopes they will carry that lesson on in their lives once they are released from jail.

Prisoners in the UK care for goats as part of NHS animal therapy sessions to teach them to “take responsibility for others” and to promote “positive social activity”.

Organic gardening at HMP Rye Hill in England “helps inmates kick drug addiction” and “creates a space that is beautiful, peaceful, and conducive to reflection.”

Pê Sâ​kâ​stêw Healing Lodge in Alberta produces thousands of kilograms of vegetables grown and harvested by inmates for the local food bank to help “break that cycle of poverty.”

Planting Justice is a grassroots organization with a mission to empower people impacted by mass incarceration with the skills and resources to cultivate food sovereignty, economic justice, and community healing.

Farm and Rehabilitation Meals (FARM) is a project that hires inmates as farmers, teaches them sustainable agriculture practices and puts produce on inmates’ cafeteria tables. 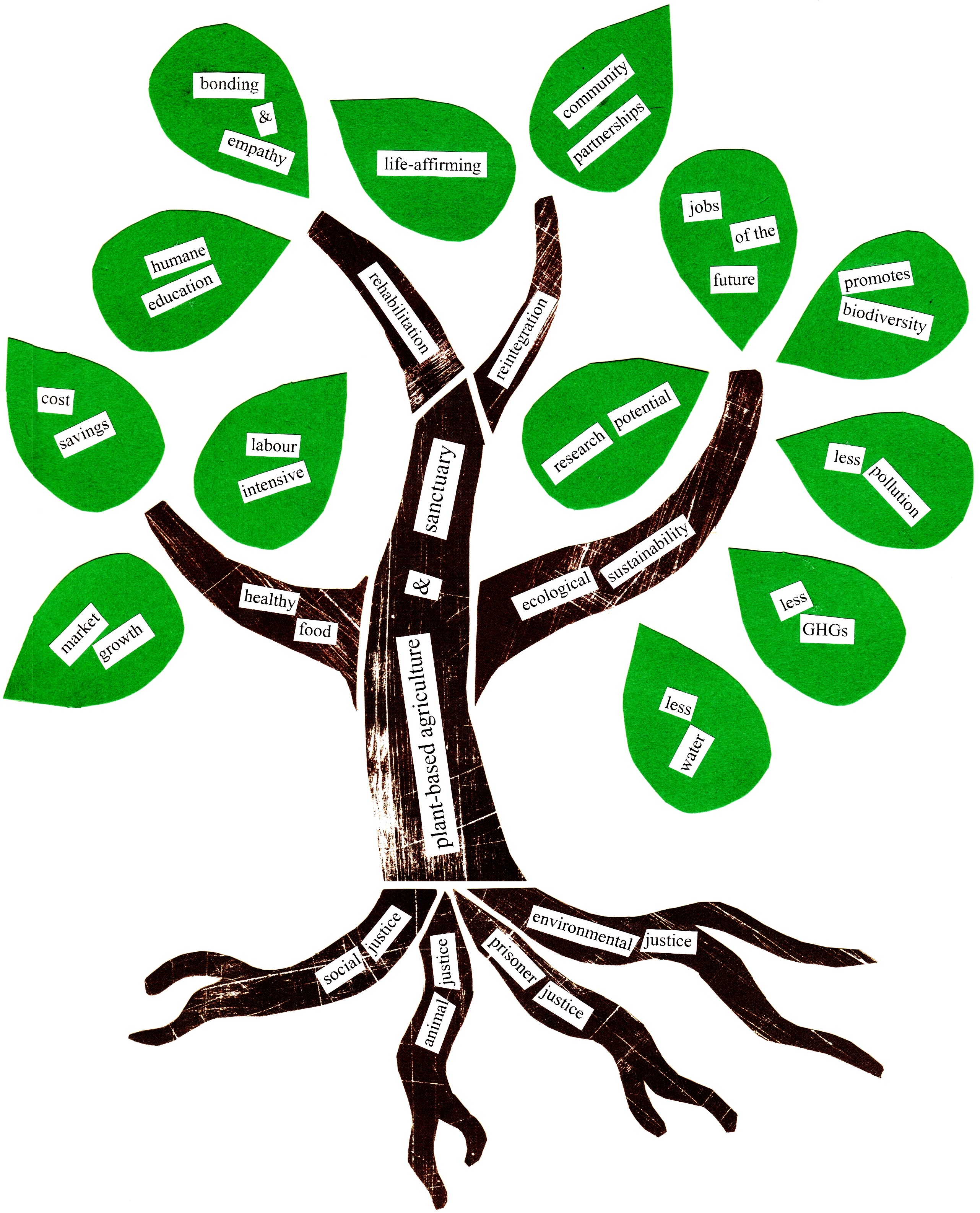