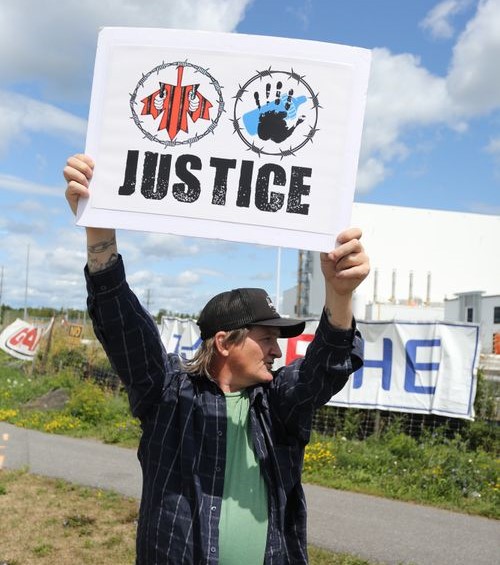 Shaun Shannon was demonstrating against a goat dairy operation slated to open as part of the new prison farm program in Kingston.

“In all honesty I was good at robbing banks and really enjoyed it,” he said in a July 31 interview with Ontario Farmer. “But I paid the price.”

In his last five years locked up, from 1990 to 1995 inclusive, “I, a city boy, started milking cows there on the prison farm and by the end I was in charge of the dairy barns,” he said. “It saved my life.”

The Kingston farm facility, without quota, had 300 milking cows, in two tie-stall units of 150 milking in each, and a large layer operation “that provided all the milk and eggs to all the prisons in Ontario and Quebec,” said Shannon.

The milk was pasteurized on-farm before being consumed by any of the prisoners, in Kingston, or elsewhere.

There were 25 inmates working with the cows, heifers and calves, a dozen in each barn. They did their own milking, feeding and AI, it was a top quality herd and it provided Shannon a couple of days out from behind the prison walls per year, in those last years, “when we showed at Kingston Fair.”

The law regarding prison labour has been made harsher today, with no top-ups to a standard prison wage.

But back then, he and the other two dozen inmates “were getting $10 a day over our regular $3 to $4 a day,” said Shannon. “That was big money to us and provided an incentive. There is no incentive allowed today.”

The self-sufficient model marketing milk and eggs without quota was always a sore spot with marketing boards, and processors wanting to sell into prisons. So it was only a matter of time before their continual tag team lobbies to government to shut them down, rumblings of which were heard behind the prison walls, caused a federal government to cave, said Shannon.

He wasn’t there a decade ago when the emotional shutdown happened and the cows were loaded, but his phone rang that night with some of his tough former fellow workers from the prison hallway phones, “who were bawling their eyes out,” said Shannon.

He educated himself on how and why that had to happen, and read chapter and verse of the CSC Food Services Modernization Act, the legislation at the time which closed all loopholes for prisons to be self-sufficient in food, or to sell farm produce to a commercial enterprise.

With other international agreements preventing exports of their prison manufactured products. Canada also prohibits any imports, “made wholly or in part,” by prison labour.

About eight years later, when there appeared to be some movement to revitalize the farms, Shannon jumped in to help, but was appalled at the insufficient knowledge of the others about the legislation, as they made public proclamations of them milking again.

When Shannon told them to read the legislation, “it means you’re going to have to dump the milk unless you get the laws changed.” There’s been no move to do so on any front.

“I was told to keep quiet and not to speak without their permission,” he said.

There had been “23 years of guards telling me what to do, but never what to say, so I left them,” said Shannon. “They wanted my testimony on how the prison farm had helped me, but they didn’t want me to get in the way of them getting federal money.”

Perhaps there is a caveat around the legislation, such as the proposed 34 kilos of research milk quota offered by Ontario – a figure also cited in an email by DFO board member Nick Thurler, before saying that the final amount had not been determined – but that isn’t going to keep a lot of prisoners busy, as compared to before when they milked 300, said Shannon.

“Plus, they are going to have to dump the milk,” which can probably be justified if they are doing drug trials, he said.

When it comes to whether or not the proposed 1,800-milking goat facility can or cannot legally provide product to the Chinese plant to export, Shannon is leaving that determination up to trade lawyers.

But he gets emotional about how small goats are the worst thing you can have on a prison farm, both from an animal welfare and a prisoner safety perspective.

Whoever proposed that goat project “never spent a month locked up, surrounded by a hard core prison gang,” said Shannon. “Because then he would know.”

He had learned quickly, working with the dairy herd, that many prisoner’s fists and feet were used on calves, if they had the chance, and that you had to find those select few who could be trusted to handle them with care.

With 1,800 small milking goats, plus young ones, combined with no incentive pay, “what will happen to those goats, if you put hardened gang members among them?”

If people think that some folks are acting irrationally with the COVID-19 lockdown, they should experience the inside of a penitentiary, said Shannon. The stinking of cow manure was something that could and did occasionally trigger an inmate, or a gang, to beat on someone smelling, said Shannon.