KINGSTON, ONTARIO – The highly anticipated return of Canada’s prison farms has attracted the attention of environmental activists such as Dr. David Suzuki and Margaret Atwood.

Since the closure of the federal program under the Harper government’s “Tough on Crime” reforms, prison farm activists have fought to save the program in defence of “justice, democracy and local food security.”

In June 2018, the government announced that prison farms would return to Kingston, Ontario, in the form of a 1500-goat dairy operation. The Prison Farm Advisory Panel confirms that this is “directly related to the marketing opportunity” with the new Feihe International infant formula factory in Kingston, where the milk will be processed and shipped to China.

In a filmed interview with Evolve Our Prison Farms, Dr. Suzuki expressed support for an alternative model of plant-based agriculture and animal-assisted therapy. “I congratulate you on proposing a program that allows people to affiliate with other species,” he says, “and there ain’t anything more satisfying than actually holding soil in your hand and growing plants.”

Suzuki explains that animal agriculture is “very expensive in terms of climate change” and sustainable agriculture requires “much more emphasis on plants.”

Writer Margaret Atwood was involved in prison farm activism when the farms were shut down in 2010, famously calling the closures “dumb as a stump.” In response to the news of 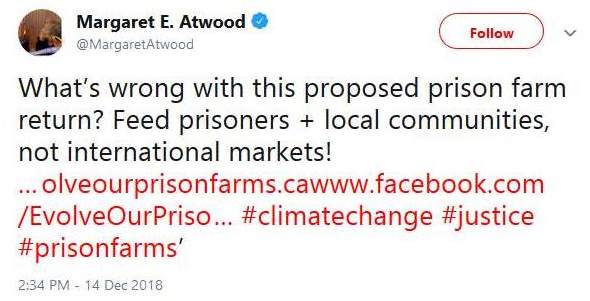 Since 2016, the grassroots justice movement Evolve Our Prison Farms has proposed a forward-thinking model for the prison farms, growing fresh produce for prisoners and community food banks, modelling innovative agricultural solutions to the climate crisis, and offering a program of animal-assisted therapy involving the descendants of the former Pen Herd cows or rescued wildlife. Similar models have already proven highly successful in some more progressive US prisons.

As an environmentalist and nature-lover, Dr. Suzuki applauds the proposal. “I think having prisons, say, taking care of birds and mammals that have been injured by humans – it’s a great idea, I never thought of that, that’s a great idea!”

In March 2019, Kingston City Councillors voted unanimously to declare a climate emergency. The Trudeau government has described climate change as “the most pressing issue of our time.” With Canada’s new Food Guide now emphasizing fruits, vegetables and plant-based proteins, the timing is ripe for prison farms to prioritize planetary and dietary health.

Calling an evolved approach to prison farms “a no-brainer,” Suzuki believes that prisons are a manifestation of something that’s “profoundly wrong in society in general.”

“It’s time for society to evolve,” he explains. “And it’s time long overdue for prisons to evolve as well, because they’ve got to be a part of the solution.”