On Nov. 25th Correctional Services Canada (CSC) issued a tender notice for construction of a new dairy cow barn at the Joyceville Penitentiary.

Tenders close on Jan. 13, 2022. An onsite visit is being organized for all interested parties on Dec. 14th, with a maximum of three people per potential bidder.

“The lowest price will be recommended for the contract award,” stated CSC.

The state-of-the-art bedding pack barn with milking parlour, vet office and inmate waiting room will employ 10 inmates. Other older barns on the site have been retrofitted to raise calves and heifers.

CSC was originally issued 32 kg of research quota from Dairy Farmers of Ontario (DFO), which would be filled by 25 normal producing cows. In prior CSC documents gleaned from Access to Information, it was stated in internal emails that there would be no additional quota purchased. 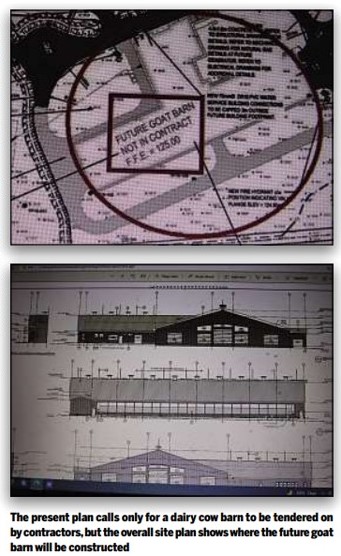 Two prior sets of barn plans had first included a 44,000-square-foot ot barn for a goat herd. After protestors, with a focus on bringing back the prison dairy herd, raised concerns about there being no dairy cows, a 100,000-square-foot barn encompassing both goats and cows under the same roof was recommended.

That plan was scuttled because the committee making the recommendations was not aware that dairy cows could not have other livestock in the same barn. The present plan calls only for a dairy cow barn to be tendered on by contractors, but the overall site plan shows where the future goat barn will be constructed and also details electrical wiring service and roadways, to be set up to potentially run to both barns.

In February 2018, the federal government announced $4.3 million for barn construction, to be completed after five years.

Thus far CSC has spent $8.8 million on the project. Documents show a large portion of this went into field equipment, the retrofit of older barns for heifers, purchasing a handful of heifers and bull calves, farm manager wages, plus engineering and environmental fees for three proposed barns.