Despite repeated claims of ‘no goats, therefore no contracts’ Conservative MPs and anti-prison labour advocates are once again raising concerns over plans for an industrial factory farm at the Joyceville penitentiary in Kingston.

Conservative MP Scott Reid is raising questions about the government’s controversial prison farm program at two facilities in Kingston, Ont., with apparent plans to use cheap prison-labour to produce goat milk to be exported to China for baby formula. The Hill Times photograph by Andrew Meade

Questions are being raised again over the government’s controversial prison farm program at two facilities in Kingston, Ont., with apparent plans to use cheap prison-labour to produce goat milk to be exported to China for baby formula.

Conservative MP Scott Reid (Lanark-Frontenac-Kingston, Ont.) raised the issue during Question Period on March 22, when he asked how Corrections Services Canada (CSC) justified its plan to open a factory farm with what he said would be 2,200 goats at the Joyceville Penitentiary, questioning how this plan would comply with Canada’s commitments to the International Labour Organization. The Joyceville Penitentiary is in his riding.

“If you’ve got a captured population, and I don’t just mean prisons, I mean any kind of place where people who are your labour force can’t get out,” Reid said. “You’ve got a recipe for disaster.”

The Hill Times first reported on the issue surrounding the farms located at the Joyceville and Collins Bay facilities after an academic report “Canada’s Proposed Prison Farm Program: Why It Won’t Work and What Would Work Better” was released on Jan. 31.

The 100-page report, written by sociologists Amy Fitzgerald of the University of Windsor, and Amanda Wilson of St. Paul’s University in Ottawa, presents a detailed critique of the CSC’s plans to convert the farms into an intensive livestock operation, using prison labour to produce goat milk to sell to a private corporation exporting baby formula to China.

Commissioned by grassroots group Evolve Our Prison Farms (EOPF), the report exposed flaws in the plan and alleged it could contravene human rights and that the likely consequences for prisoners are “not in alignment with the stated purposes, [i.e.] vocational training and rehabilitation as means to reduced recidivism.”

The original plan was goats

For weeks following the report, there was no public response from the government, until March 5, when CSC announced that it was pausing the dairy goat program because of the financial impacts of COVID-19, but that it would be continuing its dairy cow program, already in development.

Following The Hill Times’ story on the EOPF report, CSC stated it had not yet procured any dairy goats nor entered into any negotiations or contracts for potential buyers and that “speculation as to how it will be operated is not grounded in fact.”

However, that “speculation” is based on numerous reports, including statements from CSC and Liberal politicians, indicating that goat milk production was to be provided to the Chinese-based Feihe Corporation (Canada Royal Milk) plant in Kingston, built in 2019.

In the spring of 2017, then-minister of public safety Ralph Goodale appointed a citizen panel to advise CORCAN—the special operating agency within CSC that facilitates the employment of incarcerated people—and CSC staff on a proposal for the restoration of the prison farms that was submitted to the minister in the fall of 2018.

At a meeting of the prison farm advisory panel on March 7, then-acting senior deputy commissioner for the CSC Alain Tousignant said the plan was to have a dairy goat operation at Joyceville and to have land management, crops, and horticulture at both Collins Bay and Joyceville.

Diane Dowling, vice-president of National Farmers Union and co-chair of the advisory panel, told The Kingston Whig-Standard that she believed the move to dairy goats instead of cows was so the goat milk could be sold to the China-owned Feihe infant formula factory opening nearby.

In the same Whig-Standard article, Liberal MP Mark Gerretsen (Kingston and the Islands, Ont.), whose riding include the Collins Bay prison, said the operation would involve about 300 to 400 goats. With the Feihe factory opening nearby, he said he thought goats were a good option for the farm and that a dairy cow operation could come later.

In an April 2018 interview with Eastern Ontario Agrinews, Dowling said that after the meeting with Tousignant, the panel spoke with a policy advisor in Goodale’s office, who told them that “logistically, it would be easier to start with goats.”

A column in the London Free Press reported on March 16, 2018, that a spokesperson for Goodale stated: “We’re starting with goats and horticulture because it’s the best way to get the farms up and running. As these programs develop and build a successful record, that experience will inform future correctional programming.”

Misleading and contradictory statements from Liberal MPs on Kingston facilities

After CSC announced it would focus on the dairy cow program and temporarily pause the goat operation, the controversy seemed to die down until MP Reid put the spotlight back on the issue on March 22.

According to Reid, in response to his question, Secretary of Public Safety Pam Damoff (Oakville North—Burlington, Ont.) asked him for an informal meeting following QP, telling him no contracts were in place for the goat milk and implied that the goat operation is “not the objective” of the prison farms, seeming to contradict previous statements from CSC that the goats are the “core enterprise” of the program and originally, the only enterprise.

In response to a request for comment from The Hill Times, CSC said the use of products from the agricultural program, including the dairy herds, will be determined as the implementation plan progresses.

“Crops grown at the penitentiary farms are used both internally as needed and to generate revenue through sales. All revenues generated are being reinvested into the offender employment and employability program,” wrote senior media relations adviser Esme Bailey in a statement on June 2. “It’s important to note that CSC does not have agreements with third parties for the sale of dairy products produced at the penitentiary farms.” 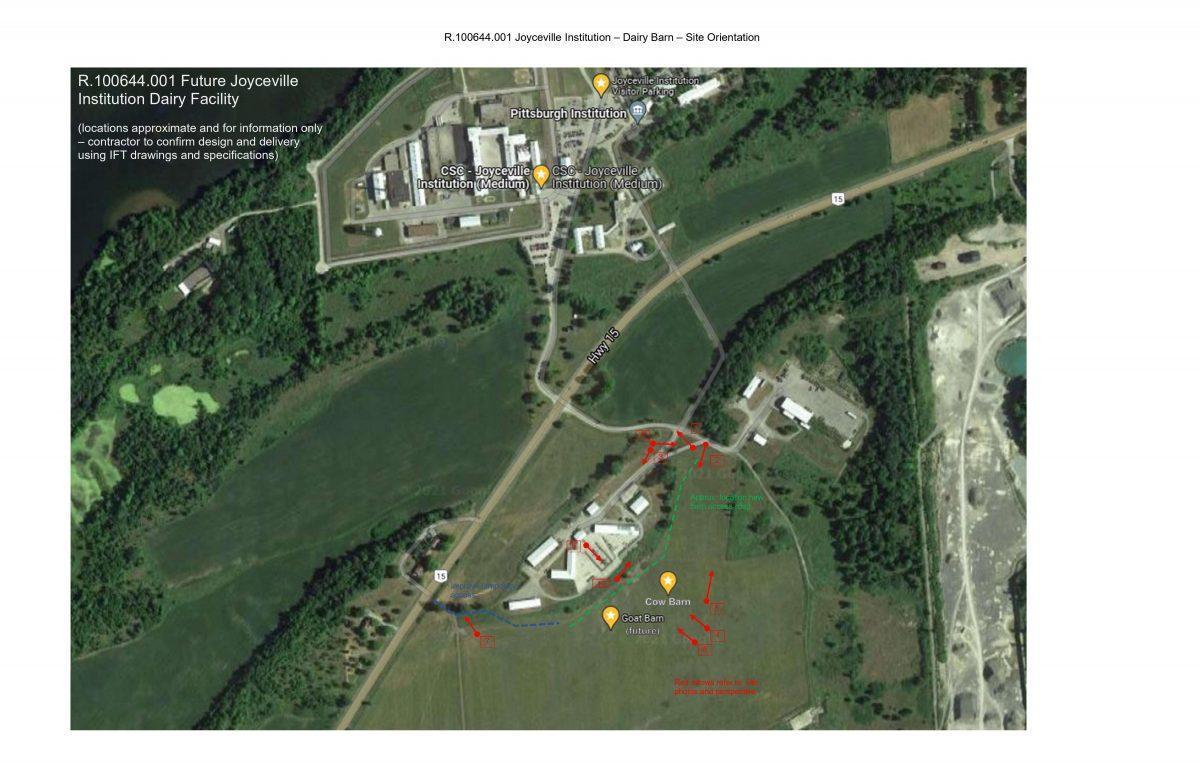 An aerial view of the Joyceville facility, included in the government’s tender notice for the ‘Construction of Dairy Facility and Cattle Barn at Joyceville Institution’ dated Nov. 25, 2021, which includes a location designated for a ‘goat barn (future).’ The $10.48-million tender was awarded to Strong Bros. General Contracting LTD on March 14, 2022. Image courtesy of Public Services and Procurement Canada

Bailey added that the cow milk produced through the penitentiary agricultural program is to be covered through a Dairy Farmers of Ontario (DFO) research quota, with “further discussions with the DFO to occur as plans progress.”

To date, CSC has invested approximately $4.27-million for facilities and has incurred $3.7-million in expenditures for implementation and operations, in addition to the $1.5-million invested in capital equipment.

On April 8, Minister of Public Safety Marco Mendicino (Eglinton-Lawrence, Ont.) said CSC had awarded a contract in Joyceville and that the government would ensure that it complied with all of Canada’s international obligations.

Mendocino, in defending the program, seemed to play a little loose with CSC research, stating that “we know offenders who participate in these programs are three times less likely to re-offend and find themselves back in custody.”

In fact, according to CSC’s research, the “three times less likely” statistic refers to people who are employed post-release “regardless of institutional employment participation.” Involvement in CORCAN employment was not found to have a “significant impact” on post-release employment and “there was no overall association between CORCAN participation and direct reductions in recidivism.”

‘No contracts, no goats’

On April 29, in response to Mendicino’s statement that a contract had been awarded for the Joyceville facility, Reid once again inquired what specifically the contract was for, with whom it was signed, and whether it was related to goat milk production for export.

However, CSC was not as final in its response to The Hill Times on June 2, writing that while it currently had “no plans underway for dairy goat operations” it “would reassess at a later date.”

In its original announcement on March 5, 2021, CSC said the dairy goat program would resume “once the effects of the COVID-19 pandemic can be fully assessed.”

On April 29, the parliamentary secretary also provided Reid with a copy of an offer for tender for a $10-million contract for “a large purpose-built dairy cattle barn…to accommodate a milking herd of approximately seventy (sic) … cows.”

In response, Damoff clarified that the CSC currently does not have any goats within its program and does not have any agreements with third parties, either domestic or international, for the sale of goat milk.

Despite the denials from the government, Calvin Neufeld, Perth Ont.-based researcher and founding member of Evolve our Prison Farms, said there is a “future goat barn” shaped hole in their story. 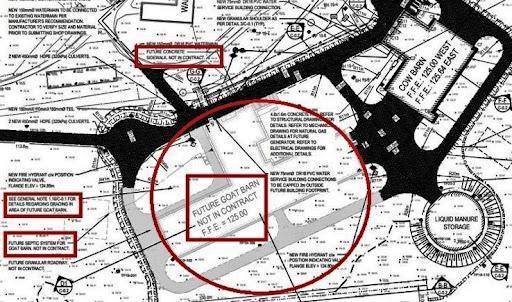 Engineering plans included in the Public Works call-for-tender published on Nov. 25, 2021, to build a cow barn and liquid manure tank at the Joyceville Prison Farm facility. The plans and specifications make numerous references to a ‘future goat barn’ to be completed once the current work is completed. Image courtesy of Calvin Neufeld 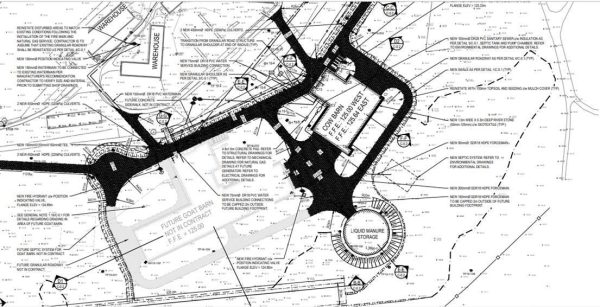 “The future goat barn is right there in the engineering plans,” Neufeld said in a May 31 interview, referring to the accompanying documents for the tender, which was awarded on March 11, for $10.48-million. “The electrical utilities in the roadways are all interconnected. The manure lagoon is sized for the goat dairy facility; the utilities are there.”

“Everything depends on those goats. It’s the only source of revenue,” he added.

Neufeld, who ran as a Green Party candidate in the 2021 federal election in Lanark-Frontenac-Kingston, Ont., added that he thinks the reason the Liberal government is having so much trouble answering questions on the program is that it’s stuck with a campaign promise that is no longer feasible or politically advisable.

What the Liberals did not understand when they made the promise to re-open the prison farms in 2015, he said, was that it would be “impossible to restore the former farming model” in which inmates used the food they produced, because food service within prisons was centralized in 2016.

“So when [the Liberals] brought the farms back, as it turned out, they could no longer feed the prisons,” Neufeld said. “That is why the national service has had to look for external markets, and identify market gaps, to avoid the perception of competing with the open market.”

Neufeld said only after angry locals and advocates campaigned to bring the farms back to preserve the dairy cow herd did Public Safety instruct CSC to find a way to add cows.

Unfortunately, since cow milk is controlled by supply management, Neufeld said CSC can’t sell the milk and can’t use it internally, hence the research quota from DFO.

“Making milk for nothing,” Neufeld said.

Neufeld said the cows, beehives, and maple syrup production that have been added to the sites are being used to promote a false perception that the old farms have come back, when in reality “it has no resemblance whatsoever to the former model.”

“It is a factory farm, at industrial levels, and it’s commercial, and whether it’s being sold to business down the street or exported to China, prison labour is being associated with the private sector,” Neufeld said. “They pissed off everybody and checked off all the wrong boxes they could check.”

The Hill Times made repeated attempts to get a response from Mendicino’s office as well as Damoff, to no avail.