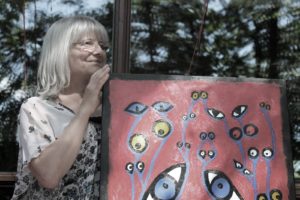 Franceen Neufeld is a co-founder of Evolve Our Prison Farms, author of Suffering Eyes: A Chronicle of Awakening, and mother of four.

Someone sent me one of those cute animal videos recently. You know the kind. A baby donkey trots up to a toddler and rests her head on his shoulder. A black goat lifts his front hooves onto a man’s lap, presses his head into his neck and kisses his face. A goose runs towards a woman, wings wildly flapping, and nestles her long neck against hers.

These scenes play out in that video, one after another, happy stories of affection and trust. But my mind is darkened by another scene, one recounted to me by a family member. Years ago he had a pet goat who had started to cause trouble, finding her way into the house, making a mess, chewing on clothes, smelling bad. The young man decided that the goat was more trouble than she was worth, so he got out his gun and fired. The goat didn’t die with that first shot. Instead, wounded and bewildered, she ran towards him, her trusted friend. So the man shot again. And again the goat did not die but kept coming towards him for protection. I don’t remember how many shots it took for her to die.

That story haunts me with its heartrending exposure of affection sacrificed to practicality, of the unquestioned right of humans over the bodies of animals, and above all, of trust betrayed.

This is the crossroads we are facing as a country as we make decisions about animal therapy in Canada’s restored prison farms.

Animal therapy – that’s how it’s portrayed by those who advocate for a return to dairy production; the cows MUST be returned to prison farms because of how important they are to the rehabilitation of prisoners. Many of the prisoners do not know what a good mother is, I was told, and the cows represent good mothers to them. I was bewildered by this statement. How could the cows model good motherhood when their calves are taken away from them at birth? Then it dawned on me: they were claiming that the prisoners saw the cows as THEIR mothers.

This took my breath away.

Animal agriculture undermines rehabilitation because it fractures relationships of affection and trust. There exists no healing in this betrayal of friendship. But there is another way. Bring the cows home, yes, but bring them home to freedom from harm, and then witness the power of sanctuary to nurture compassion, engender empathy and teach reverence for life.

There is another scene in that beautiful animal video. A man and a cow are lying side by side on the grass. The cow turns her head and brings it down to rest across his neck. This is what it looks like to be loved and trusted by one of these beautiful mothers. Let us be worthy of her.